With our next 24 hour race in just over 1 week’s time, I thought that it was about time that I put finger to keyboard and write my blog about our last race – the T24 MTB-fun race at Gits in Belgium. 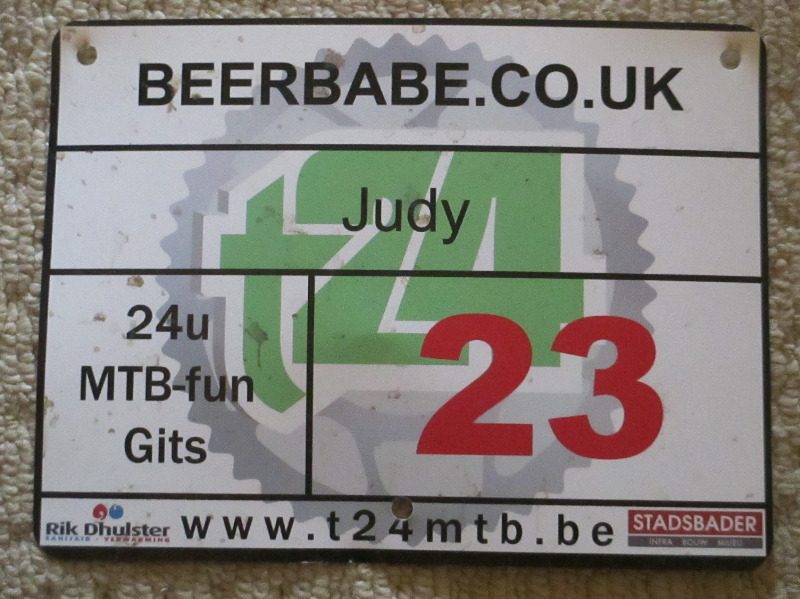 The venue had previously been used for the 2007 Cyclocross World Championship and contrary to popular myths about Belgium, it was not flat – although most of the climbing and descents were during the 1st part of the lap. The previous 2 editions of the event took place in the small town of Torhout but, as the local Council and farmer wanted major changes in the course, the organising team decided to move the event to Gits instead. The event was welcomed with open arms.

We arrived at the venue and made short work of emptying the car and putting up the tent as this video will attest to: (just click on the photo below)

The course promised some interesting features including a technical drop-off, flowy singletrack, sand (especially for us fat bikers) and every lap would send the competitors through the beer tent – which would be the hardest part for us. 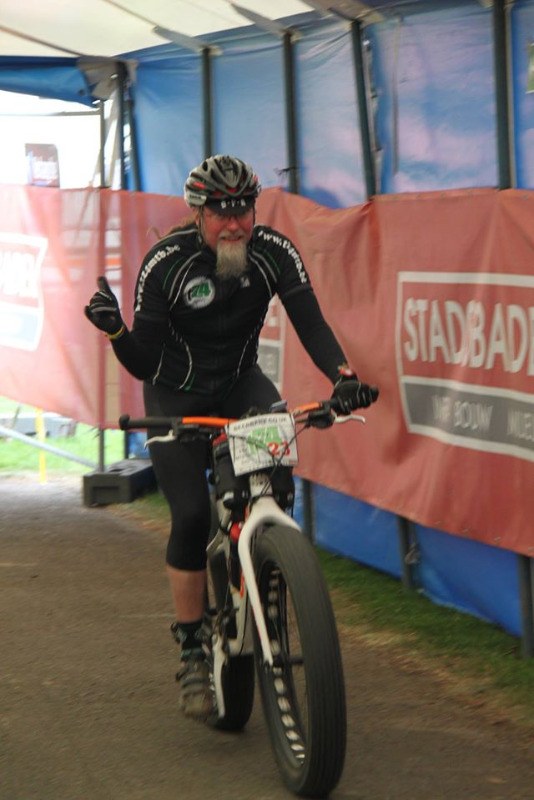 At this point, I ought to explain the reference to Cheers. As people started to arrive, we were greeted like long lost friends. It would appear that we have become quite famous at the event and ‘everyone knew our names’! Even folk we didn’t recognise knew us. It was almost embarrassing!

We had intended to get an early night but our socialising led to rather a few beers being consumed and we both woke on the morning of the race feeling a little delicate! Ah well, the race wasn’t due to start until 1pm and a full English breakfast cures all.

Not being the shy type, I started the race in full tutu/pink sock/Judy jersey attire, although the fat tyres were enough to turn heads. Roy decided to save his kilt for the closing laps of the race. 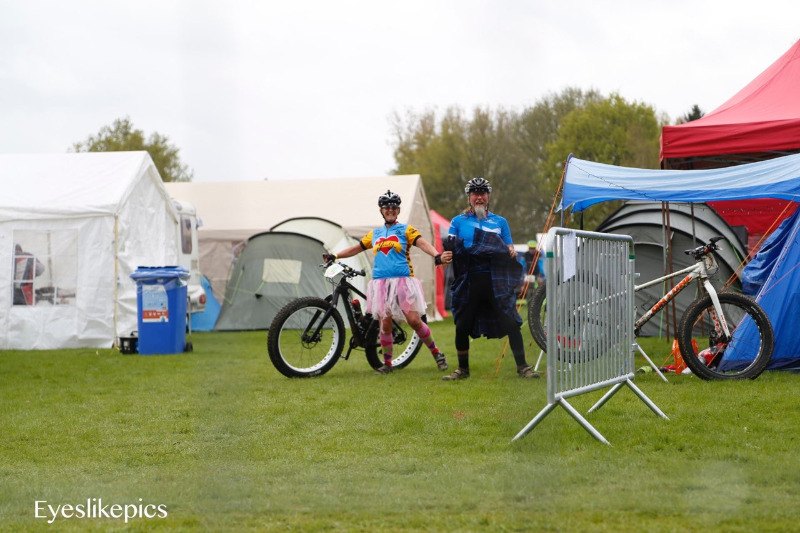 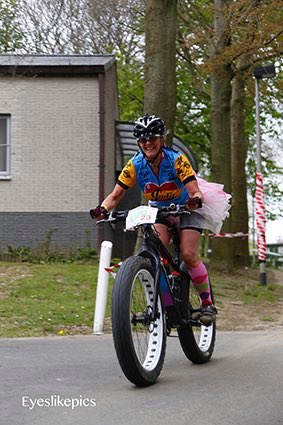 Our race strategy changes each event and this was no different. After a single lap change over, we soon settled started double lapping. As the course ran the camping area, there were lots of people shouting encouragement. Once again, I was amazed in the number of people who encouraged me by name – I could get used to being a celebrity (however minor). It was a hard decision to remove the tutu, but at some point we had to get ‘serious’. 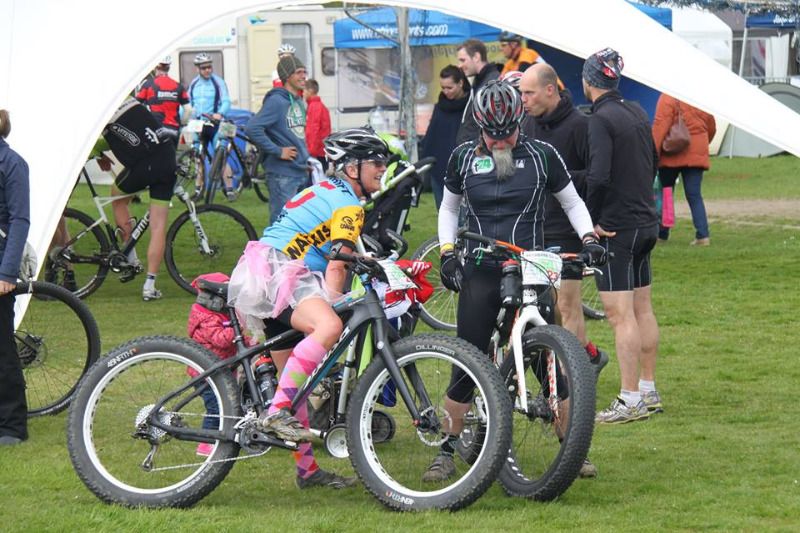 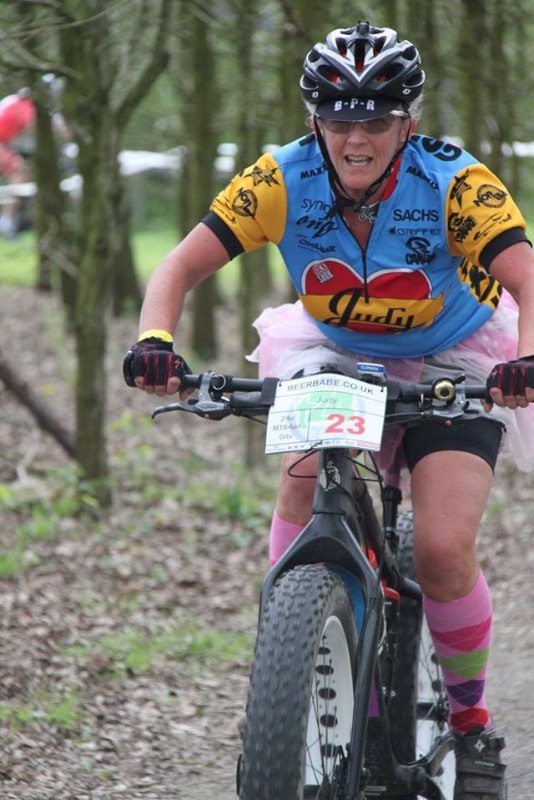 The sand was causing a lot of bother for some people & even with the fat tyres, it was heavy going as it was deep and dry. I was almost praying for rain. It gave me great satisfaction to be passed by a quick rider only to overtake them back as I rode through the sand. Lots of riders gave up and went ‘cyclocross’ style by picking up their bikes & carrying them.

The rain started just as the darkness fell and there were sections that became quite tricky. Our neighbour suffered a really bad shoulder injury & had go to hospital. Our winter training had been interrupted through illness & we decided to stop of a while. Beer, frites and sleep revived us & we started riding again just after dawn.

Just as our race strategy changes, so does the fuelling. By the early evening, I was really struggling with the energy drink & gels and my stomach went into serious cramp mode. Getting going again in the morning was difficult as I just couldn’t face energy food again. As part of the race entry, we were provided with breakfast and the pain au chocolat actually hit the spot. We have since started to investigate alternate food options but that is a story for another blog.

On the positive side, I was blowing awesome double snot-rockets!!

By the end of the event, we had completed 300km, not quite our goal but we were happy. We crossed the line in true Beerbabe/Beerbiker style. 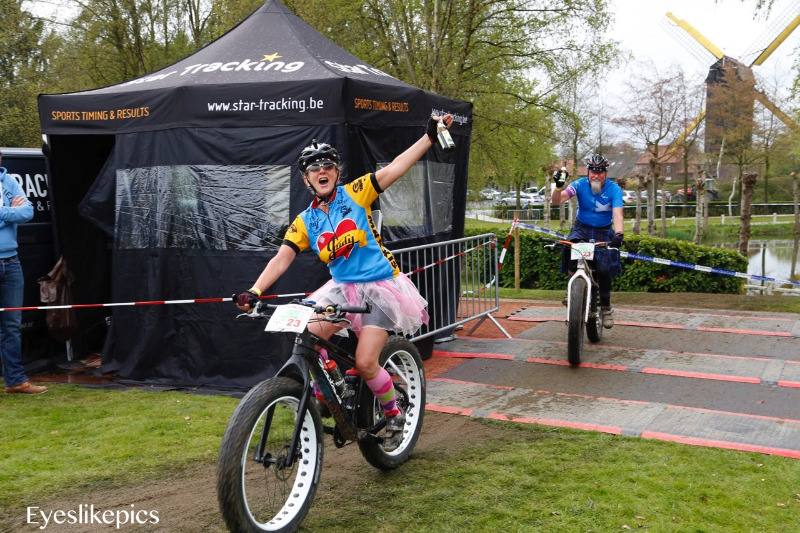 We even had something left in the tank for a 90km ride on the Monday!

Huge thanks have to go to the organisation. Once again they put on a great race & I look forward to next year’s edition. Also thanks to Provoost Dieter (Eyeslikepics) for the great photos & timelapse video.