As with all my major birthday’s, I decided that I wanted to do something special for my 50th.

It was going to be difficult to beat my 40th, but that was celebrated before I started mountain biking. I had been skiing once, 20 years earlier and it had scared me into not wanting to go back. We had done a lot of cross country skiing and in order to learn how to skate, we had to take downhill lessons. We travelled out to Durango and arranged lessons at ‘Purgatory’ or Durango Mountain Resort as it had been renamed to. Unknown to me, Roy had contacted one of the local brewpubs who had agreed to do something special for my birthday. I met his new best friend ‘Eric the brewer’ and unwittingly chose my beer. On the evening of my 40th, we wandered into Carver’s Brewing and there on the beer selection board was ‘Judy’s Jolly Good Java Porter’. 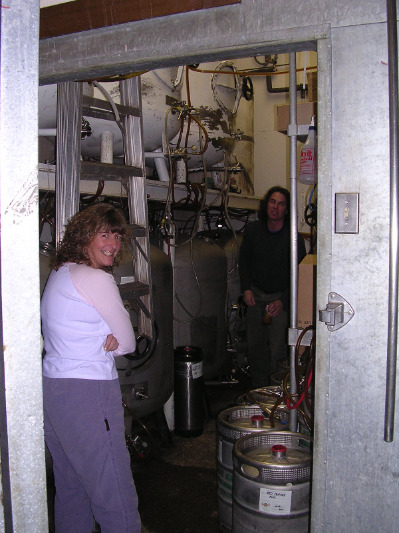 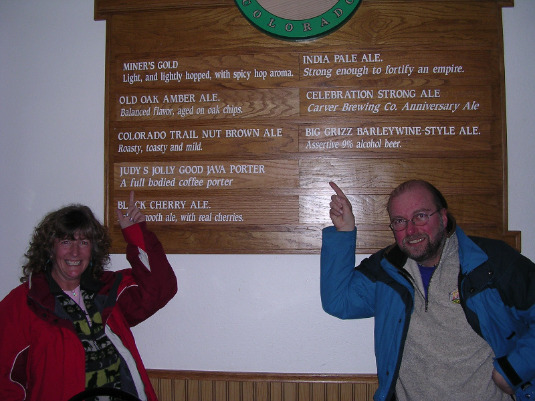 So as you see we had some way to go to beat that trip. Mind you, Roy’s original plan, flying to New York on Concorde, would have been near impossible!!

We have started to make regular trips to the near continent and I decided that a long weekend in Ghent might be suitable. Having found a beach race nearby on the same weekend, the birthday plan was quickly formulated. Entry in, hotel booked, tunnel crossing sorted & we were on our way.

What we hadn’t planned for was the continuous weather systems that started to batter the UK & northern Europe but mountain biking is an outdoor sport so we just had to take the risk.

During the week before the race, the forecast improved weather-wise, but it was likely to still be windy – not what you want for a beach race.

We had a good breakfast at the hotel and drove to Bredene beach, where the race was to be held. At this point, it was still raining and the wind was blowing hard. At signing-on, we were told, in Flemglish that the race would be run in the opposite direction to normal as they did not want the top riders getting a tail-wind & going too fast along the beach. Having never raced there before, we didn’t know anything different. 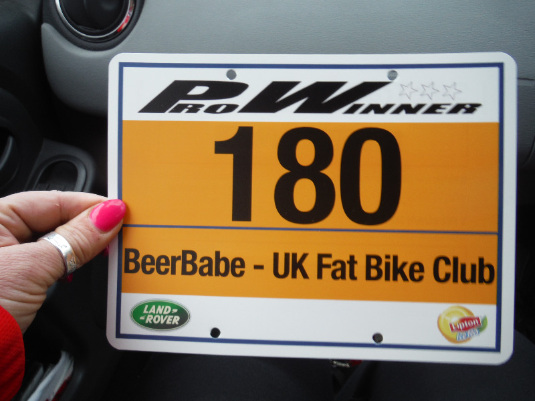 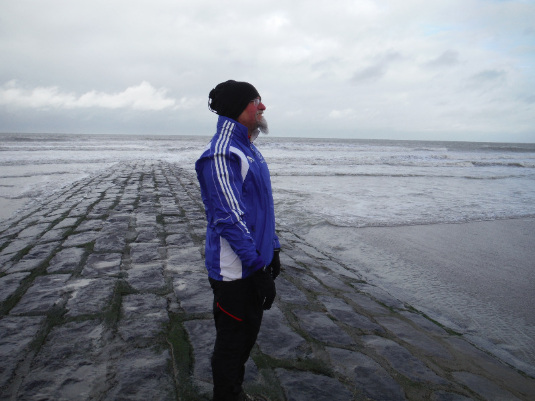 There was rather a wait at the beach before low tide, so we took the opportunity to have a recce along the course. I think that I should add at this point that we were using our fat bikes Fatso & Bart whereas everyone else was on skinny wheeled mountain bikes. Hey ho!

Down on the sand, the conditions were brutal. The south westerly was blowing vast clouds of sand into our faces. Even the sand was like riding through treacle. I kept checking the tyres to make sure I didn’t have a puncture. It got slightly better at the water’s edge. 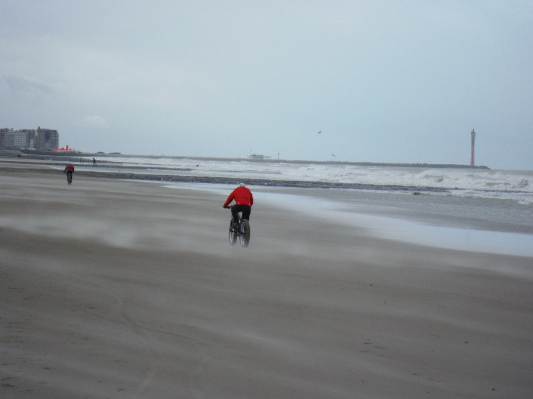 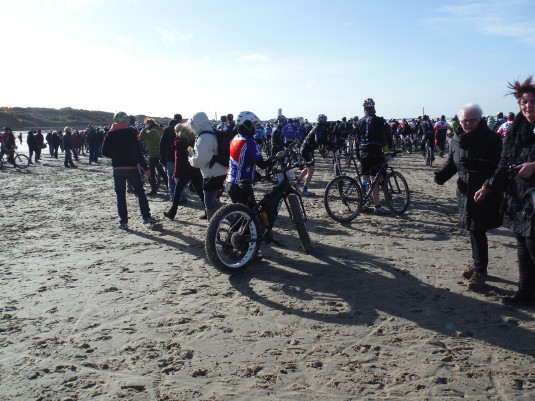 The riders’ briefing was all in Flemish & I managed to recognise a few words such as left & right – note to self – learn to speak the lingo!!

We were certainly the focus of attention on our bikes, with much laughter pointed in our direction.

All too soon, the race was underway and we were at the back of the field. We struggled to make forward progress as the wind blew directly in our faces. It was blowing at a constant 60kph with gusts of up to 80kph - this was going to be hard. On the positive side, due to our 4” tyres, we were able to ride longer in the sandy sections than most of the other riders (except the top racers – who powered through as though they were riding on tarmac).

Away from the beach, the course headed along a concrete path through the dunes – it wasn’t difficult to understand why the lead cyclists completed the 35km in the time they did. At various points the course dropped onto the beach – literally!! We reached one with a large group of spectators and I rode off the kerb & nearly made it to the hard packed sand – without face planting! Thinking back on it now, I realise how riding a fat bike has improved my riding ability (or was it just Bart taking over)!! 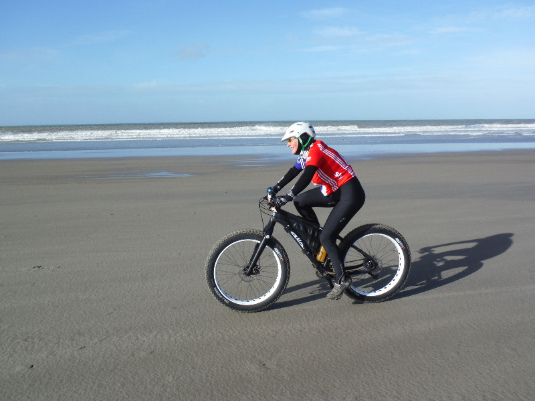 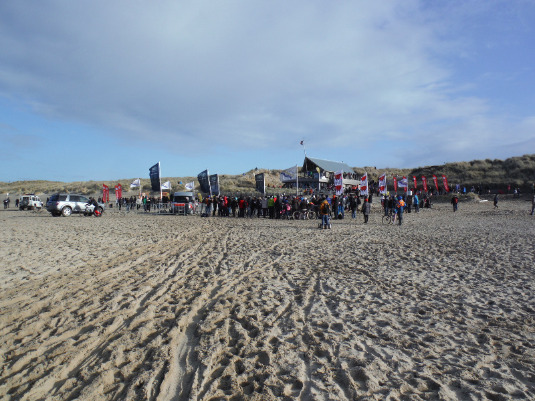 Having been lapped, the distance for our race was shortened and we finished 19th out of 30 in our class. We certainly got respect for attempting it on such inappropriate bikes. 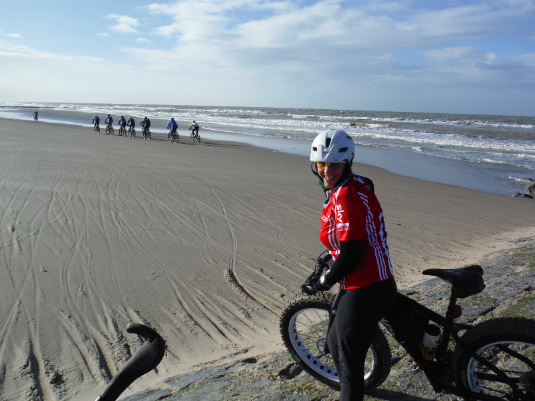 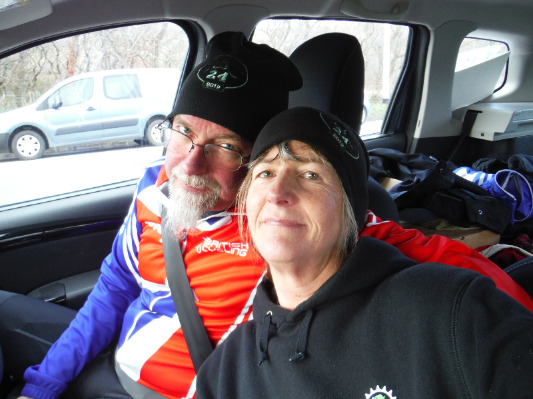 Totally beaten up, we returned to Ghent for the evening and to enjoy the rest of the trip. The weather was really kind to us & we managed 2 days of riding around the local countryside enjoying the local beer & food. I was quite surprised at how well the water was being encouraged away from the fields & tracks. Plenty of cleared ditches allowed the fields to drain and even the tracks were in a far better condition than in the UK.

I had a great birthday & am now counting the days until we can go back. The next trip is for another race, a 24 hour mtb race based in Torhout, Belgium. Ah well, more fat bike riding, more beer, more good food & a chance to meet up with good friends.

So now I think it’s time for a beer – with no electricity in the house as I write this (I think the wind followed us home), why not!! And also, it’s getting a bit dark to see the computer keyboard.