The weather around Poperinge & West Flanders on Thursday August  9th wasn't good with strong winds & even the odd mini tornado in the area. During that afternoon the weather passed by one of our favourite little Belgium breweries De Plukker nr Poperinge &, although there was no damage to the brewery itself, it left its mark on the large hop field behind the main building. De Plukker beers are brewed from organic hops grown in the surrounding fields. Owner Joris Cambie is a 4th generation hop farmer as well as a brewer, that field is known as the 'Great field' due its large size.

During the afternoon, one of the hop poles snapped in the extremely strong winds followed quickly by another pole, then another, then another & the strain on the remaining poles caused them to give way to. Eventually after the storm had passed by over 90% of the hops had come down & were lying on the ground. Putting it simply - a disaster!

News broke on the Friday when Joris posted a few photos on Facebook & Twitter. Lucky for us, we were heading to Westouter nearby on the Saturday for a week, so once settled in, we set off on the bikes for the 20km ride to De Plukker. Here we met up with Kris Langouche, the brewer, & a couple of locals for a few beers & to see the damage for ourselves. It wasn't good. Late afternoon Joris arrived & I have to say he looked a broken man, unsurprising really, Judy gave him one of those famous 'Judy hugs' that are normally reserved for fellow mountain bikers. The brewery closed but we stayed on & shared a few more special beers & we talked, Joris had a plan! 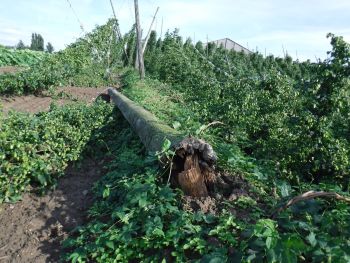 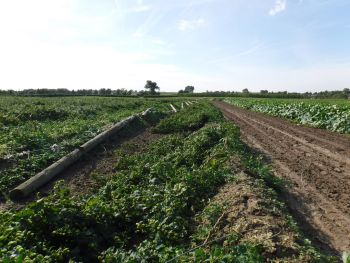 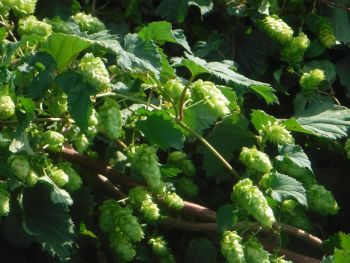 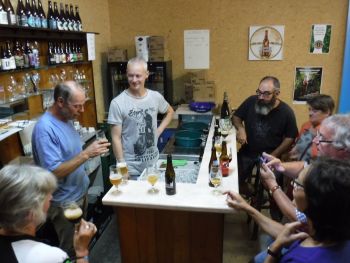 On Monday the 13th a small but determined band of fellow hop farmers, workers, family & friends gathered at De Plukker to implement Joris's plan & lift the hops. They started by clearing some of the carnage before positioning the 1st of many main hop poles that were going to be required. 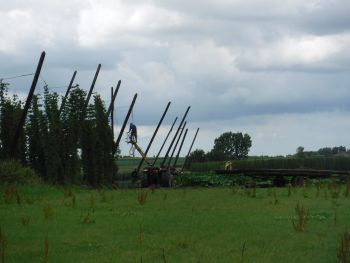 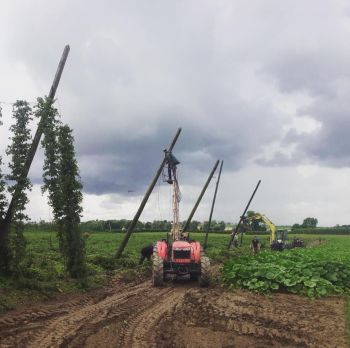 This work continued all week & we visited as often as we could during our rides. The only day we missed was the Wednesday when we competed in our main objective of trip, the PoperingeXL. A 90km mountain bike event in the 'Flemish Alps'. 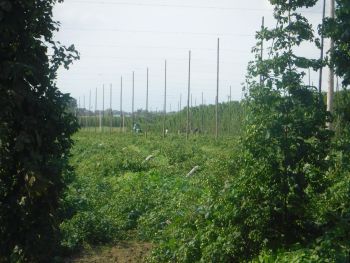 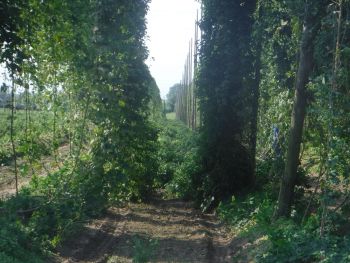 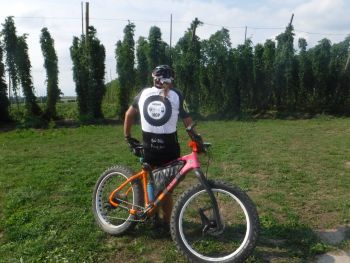 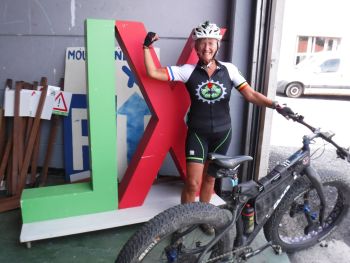 Slowly but surely the infrastructure required to lift the hops back up was put in place followed very carefully by the slow re-stringing & lifting of the hops back up to their rightful place overlooking the many other fields of hops around the brewery. As we left for home on the Sunday we paid one last visit but as this was the Sabbath, there was nobody working but the field was looking a lot better. 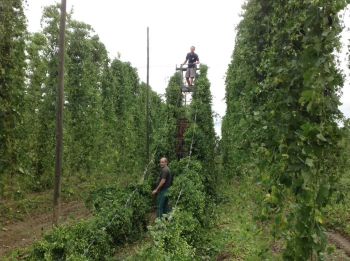 Monday the 20th, just 12 days after the field came down, Joris hand pulled the final row back into position, the job was complete, beers were opened, toasts were made for this was a job well done. But how would the hops fair? Only time would tell.

As the glorious summer of 2018 continued the hops in the Great Field flourished & bounced back to their former glory. Hell there was even time for a hop themed wedding reception in & around that very field. 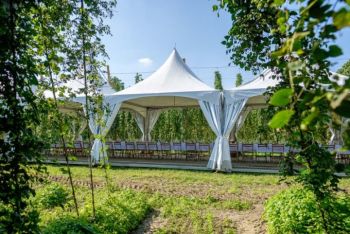 But before long it was time to harvest the now ready hops. After the harvest Joris estimated that he'd lost around 25% of the field but, thanks to afore mentioned glorious Summer, the yield was up so the field produced around the same as 2017. So I'd count that as a save.

Once a year Kris brews a 'Single Green' hopped ale using fresh hops straight from the field, this year there could have only been one chose, it was obvious to everybody. It just had to be Goldings from the Great Field. So during the 1st week of September during the harvest of that field, Kris fired up the brewing kettles & produced 2000lts, just 4930 bottles of 2018 Single Hop using 50kg of the Goldings hops saved. To be honest, the beer could just as easily have been called 'The Great Hop Lift Ale' as it would have been rather fitting. 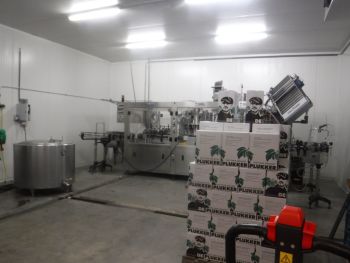 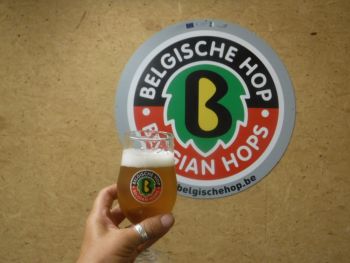 From the moment Kris started posting photos it was very important for us to get hold of some of this inspiring beer. Luckily for us we had booked to return to the area with our bikes for the Armistice Centenary & another mountain bike event. I made contact with Kris & on Thursday 8th November we visited the brewery again, shared a beer & picked up a case of '2018 Single Hop Ale'. With beer in hand we stopped by the field which was looking great again, if bare of hops in November. Now & only now could the story of the 'Great Hop Lift' be complete for us. 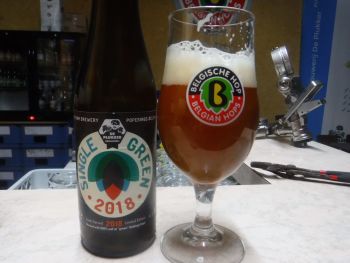 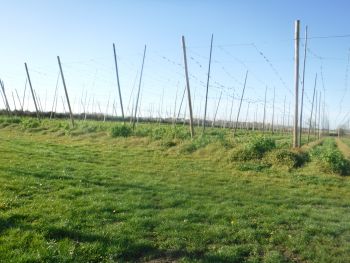