What a great weekend that was! Probably the toughest race of my life so far. 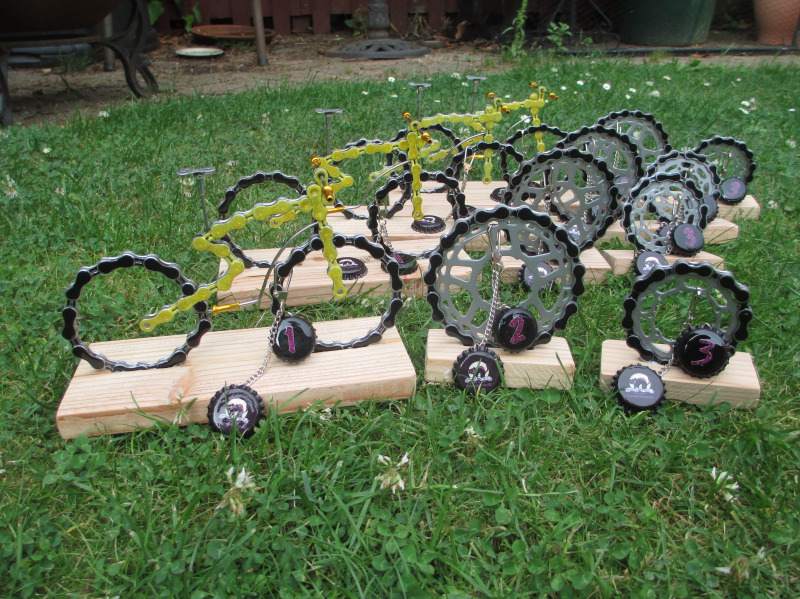 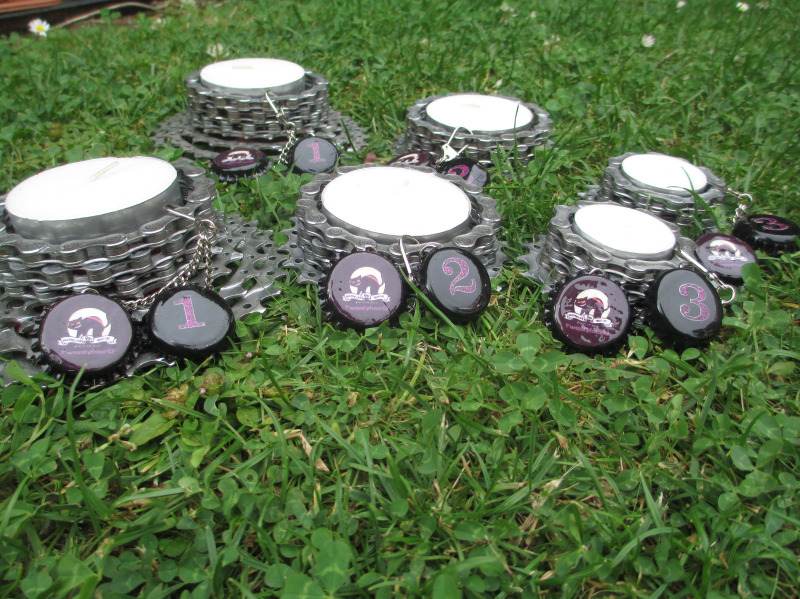 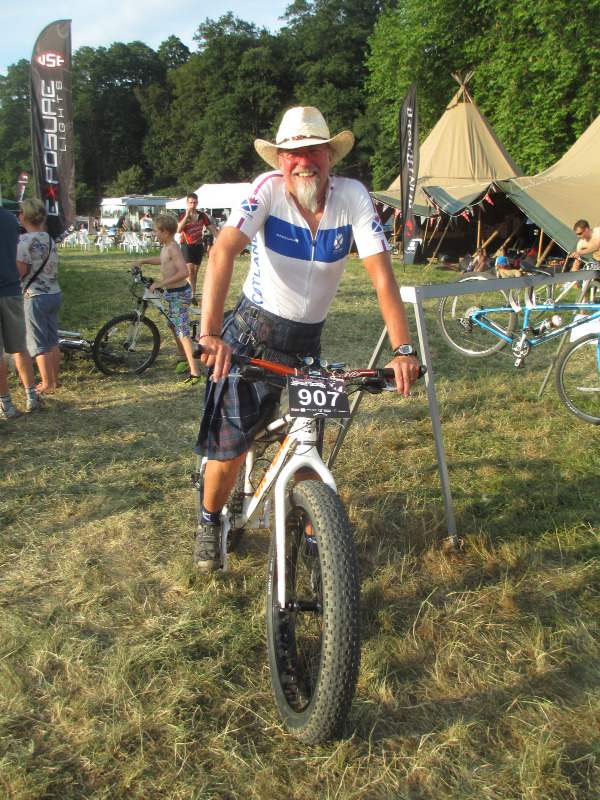 Once that was done (& I was rather pleased with how it turned out) I could then get on with sorting out stock for the trade stand and also packing everything else required for a weekend’s racing. In the end, I was better organised that I thought I would be & even had time to do some baking.

The usual ‘pre-race’ weather watch was not so much about the rain, but more about would the temperature cool down enough & what would the temperature be at night. We had opted to do the Torchbearer race which was due to start at midnight on the Saturday. Over the last few years, all of the 24 hour races in the UK had been rain-soaked ones. Mountain Mayhem 2014 was dry so we couldn’t expect another dry race – or could we? But what do they say about buses coming along in pairs?

We headed down on the Thursday and as we made good time, we were able to drop into the Mountain Inn at Lutton for our annual visit & 1st pint of Dartmoor beer.

Friday was spent getting the stand ready, doing a practice lap, keeping cool due to the excessive heat and most importantly, serving the beer for the Beer & Cheese evening. For the 2nd year running, Dartmoor Brewery was a highly appreciated beer sponsor. They even entered a team in the 12 hour race. 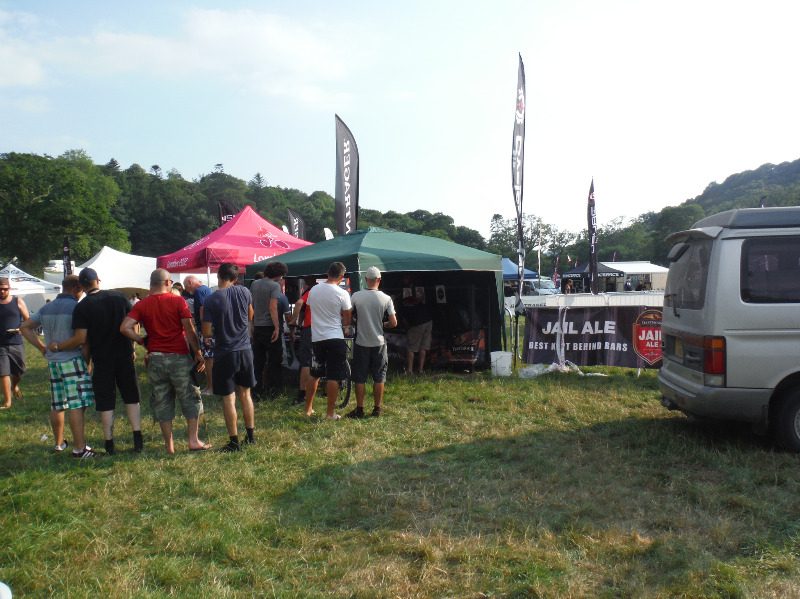 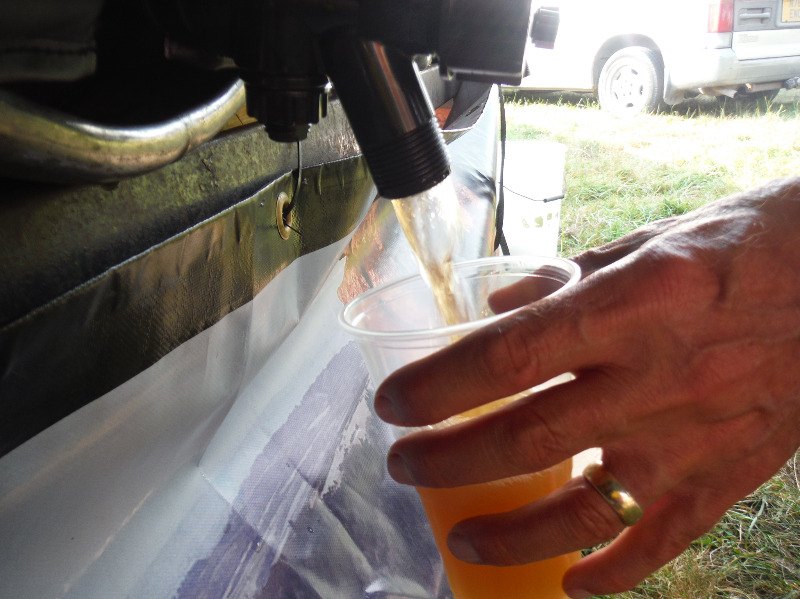 Saturday morning was all about fat bike love. From being 2 fat bikes last year (Roy & me) there were 8 of us competing in the 12 hour solo races with other ‘fat’ riders in other classes. 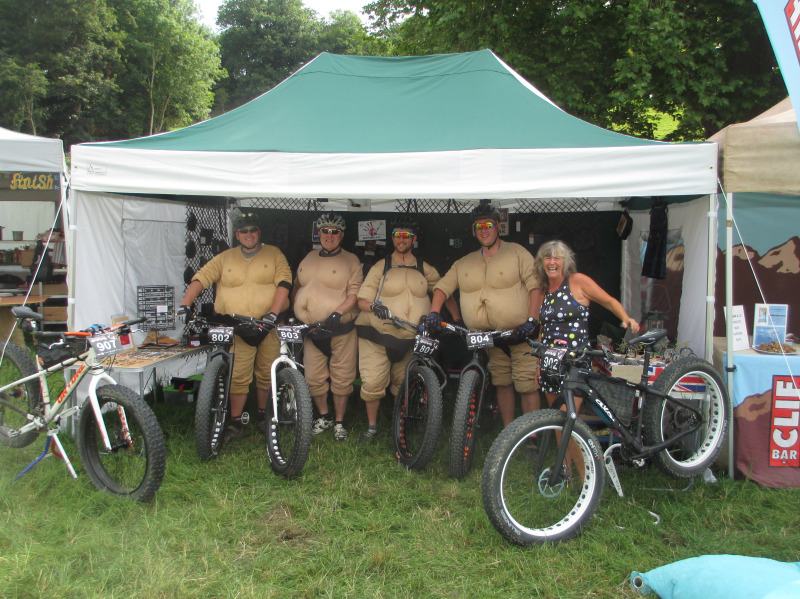 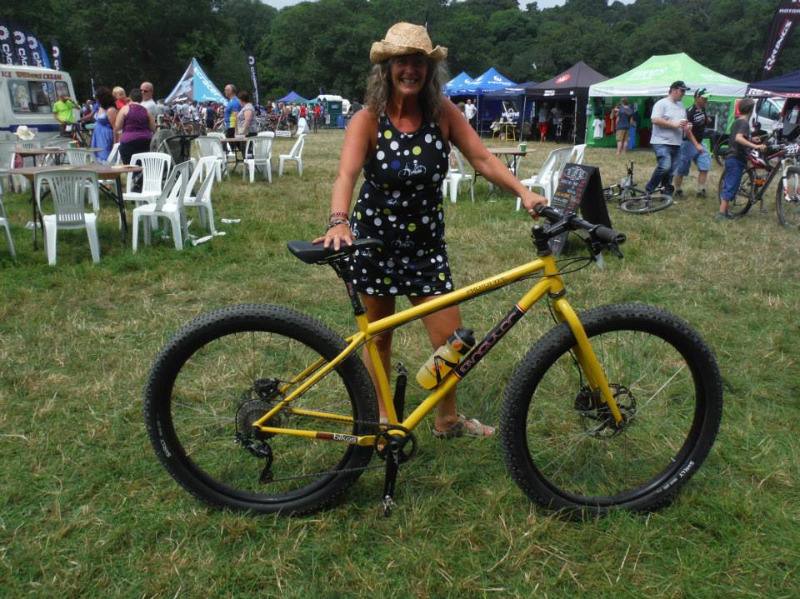 I made some new friends and got to drool over the Singular Rooster, which Roy’s waiting for via Kickstarter.

The main race got underway in the midday heat on the Saturday and as the afternoon went on, the temperatures began to soar. All too soon, it was time to fettle the bikes in readiness for our race & then catch some zzzzzzzz’s.

At midnight, fireworks signalled the end of the 12 hour race & the 30 Torchbearers headed out into the night. Our race plan was to go out & enjoy the race. I fully expected to be 3rd as I was riding my fat bike whereas the other 2 ladies were on standard mountain bikes. On the 1st lap, I found myself swapping places for 2nd and 3rd place. Amy was better on the climbs & I had the advantage of the descents. This continued into lap 2 until I came across a stricken rider & stopped to help. Milly Wilson, who was doing the 24 hour solo, had broken her chain and was walking along the course. I got out my chain splitter and she was soon on her way again. Good karma!!

I completed lap 2 and had to stop for the 1st change of clothes at the end – I was sweating buckets even though it wasn’t overly warm.

After 2 more laps, a 2nd change of clothes was required and the next set did just a single lap. I was going to run out of dry clothes at this rate. At this point I had a wardrobe malfunction & broke the zip on my bib shorts. Luckily a safety pin kept everything together & my modesty intact!

While I was changing, Roy went off to look at the results and came back with the news that I was only 2.5 minutes off the lead. The race ‘strategy’ was thrown out the window & I headed out with the intention of catching & passing Sarah. OK, so that wasn’t really what was in my mind, but it certainly got me dreaming of taking the win.

I have never been in that position before but I was determined to give it a go. I took the lead at the end of lap 7 and held onto it for lap 8. Despite a jammed chain & cramp, I continued to push forward. Sarah & I were really close with only a few seconds separating us. As I stopped to fuel, Sarah came past & I doubted that I could get her back. I had given everything I had and more as well.

Roy joined me for lap 9 for moral support to help me get round but I knew I was pretty well spent. I called it a day but he headed out for his glory lap and the obligatory handshake with Keith Bontrager at the end.

I had a quick shower & got the beers ready for the post-noon finishers – from racer to barmaid – there’s no rest for the wicked. 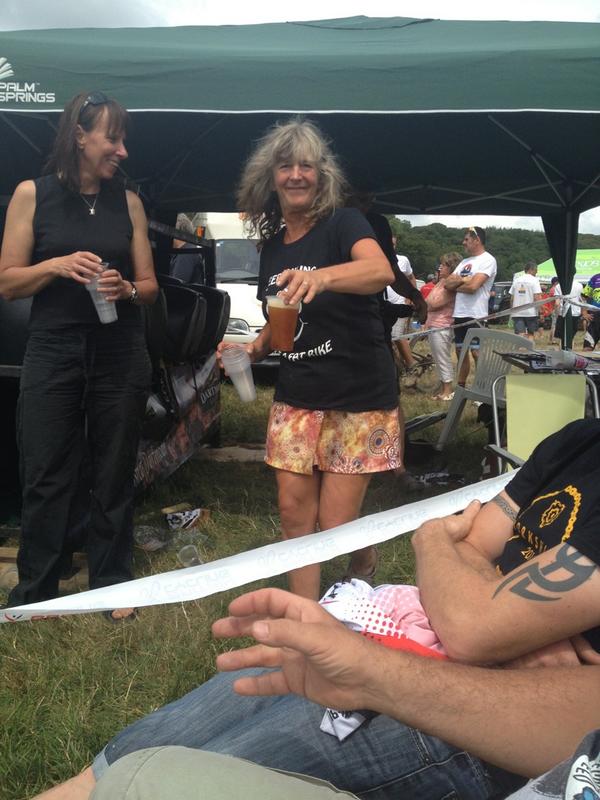 I then had to present the trophies that I had made to the 24 hour soloists & also the Torchbearers. As I had got 2nd, I shook hands with myself & got a hug from Keith. 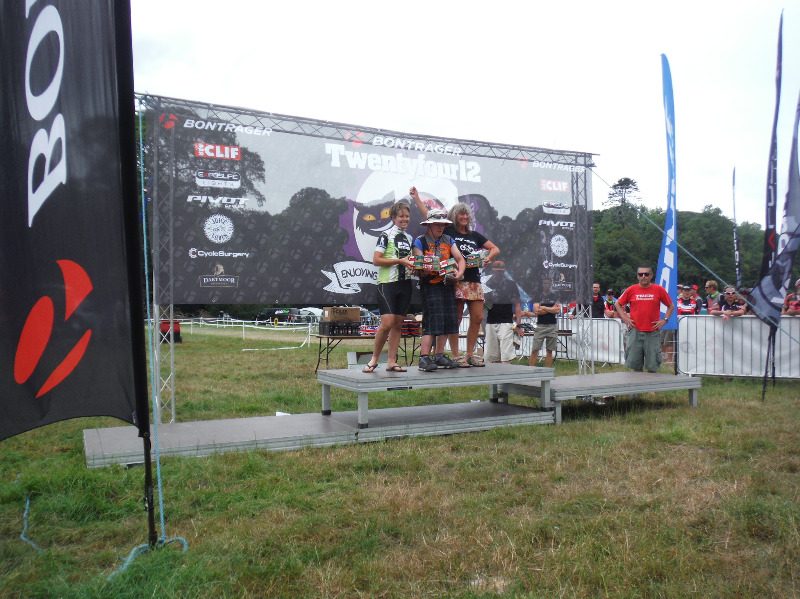 The major achievements for the race were:

Huge thanks have to go to:

Biggest fails of the weekend:

Time to go shopping for some new lycra shorts!