We came out of the winter with a good level of fitness thanks to wet rides & Sunday turbo sessions watching CX on Dutch & Belgium TV.
Our 1st event of the season was in our adopted 2nd home, Westouter in the 'Flemish Alps', Belgium. The Berghazentocht (Mountain Hare Tour) consisted of several loops each returning to the feed station within the village. The weather in early February was predictably wet & windy leading to some very muddy trails. This lead us to shorten loop 3 which dropped off the far side of the Mont Noir onto fields & tracks that are often muddy in the middle of Summer. But fun was had by all along with a beer & sandwich at the finish all for just 5 euros ! 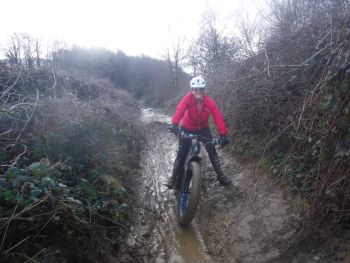 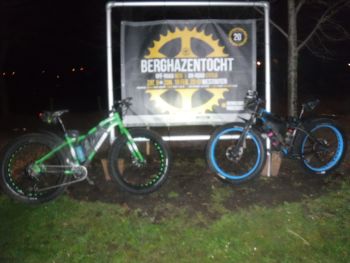 10 weeks later we were back in Belgium for T24 and the Belgium 24 hour Championships at Hooglede-Gits one of the friendliest events you could ever do. We both started slow & steady hoping to last the distance. By midnight Judy was 3rd in class but checking the results showed the 2 girls ahead had stopped, so time to up the pace & press on. The predicted rain arrived at 1pm & by 3pm the course was pretty slick but Judy had taken the lead so time to fuel & take a break. At 6am the rain was still falling so we slowly got ready & then decided to partake in the free breakfast provided by the organisers. At this point we noticed that Judy's closest rivals were back out on the course so off we went again on the ice like mud. We both had tumbles in the slippery, wet conditions but in the end the victory & another Belgium 24 Hour Championship was secured by 3 laps. 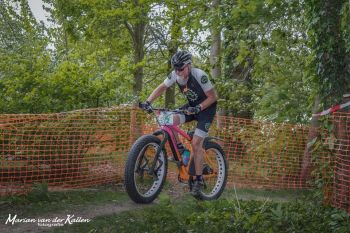 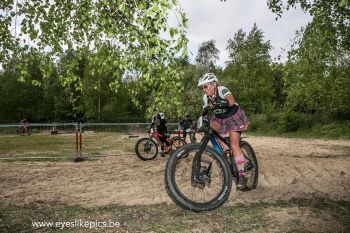 Just 6 weeks later we again returned to Westouter for a 10 day break taking in LaBiere Tour just over the border in France on 'Whit Monday' another lovely Catholic religious Holiday there. 4 hours after our arrival on the Saturday my season nearly ended following a freak accident with 'Mort' my 9zero7 resulting in me being blue lighted to Ieper Hospital with a dislocated kneecap! 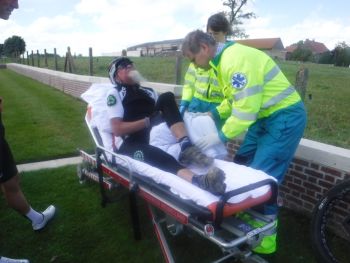 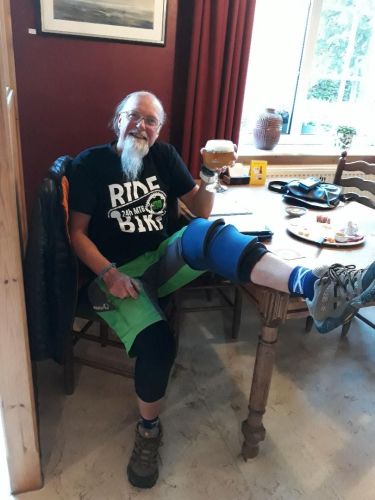 I have to say everybody involved was amazing from the help we got at the roadside in the middle of nowhere, to the ambulance crew, the reception, nurses, doctors everybody. The knee was repositioned, without pain killers !, xrays were taken & an enormous knee brace was fitted, no riding for me. As I lay on the ground I did wonder if I would ride again, certainly for 2019 at least. Oh and Judy was amazing especially when you consider she was over an hour away from the cottage with 2 bikes, by herself with some bloody great hills to get over. Then she had to try & find me in a foreign hospital. Awesome work honey! The day ended well with a lock in at the local bar, 'Belgium beer is better than painkillers' is what the Doctor told me.
Thankfully I was able to just about drive so on Monday whilst Judy competed in the rain & mud (there is a theme trending here). 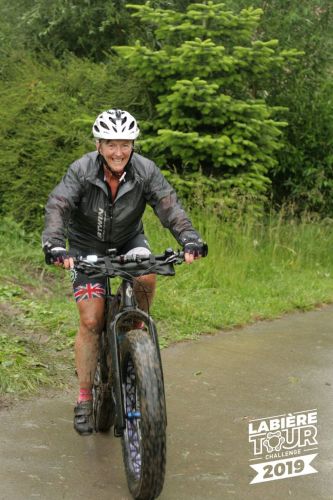 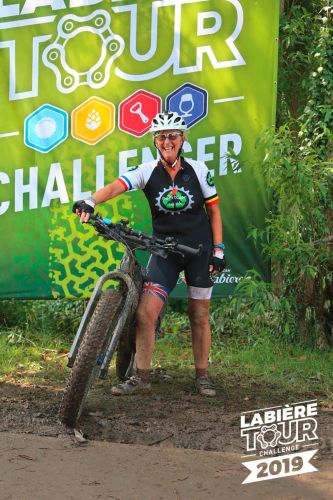 I drove around trying to find her to take photos. It was another great day seeing many of our Fatteux 59/62 (the local fatbike club) friends & yes Judy took the overall Ladies award no mean feat in such terrible conditions. By the end of the week I was back on the bike riding with a fair amount of pain even though I'd been told not to.
Once home my knee continued to improve for a couple of weeks before taking a serious turn for the worse to the point I could barely make 20km, so off to the Docs I went. Thankfully a course of physio from Ben at Cranfold Physio in Cranleigh set me on the road to recovery at last.
Exposure Twentyfour12 & the UK Fat Bike Championships a 6 hour race arrived too soon for me but again against orders I rode a practice lap & 1 race lap coming in last but I didn't expect to be there. Great atmosphere in great weather (bummer for me) & great beer from on beer sponsor Dartmoor brewery meant for a fun weekend amongst friends & saw Judy take the Ladies UK title again. 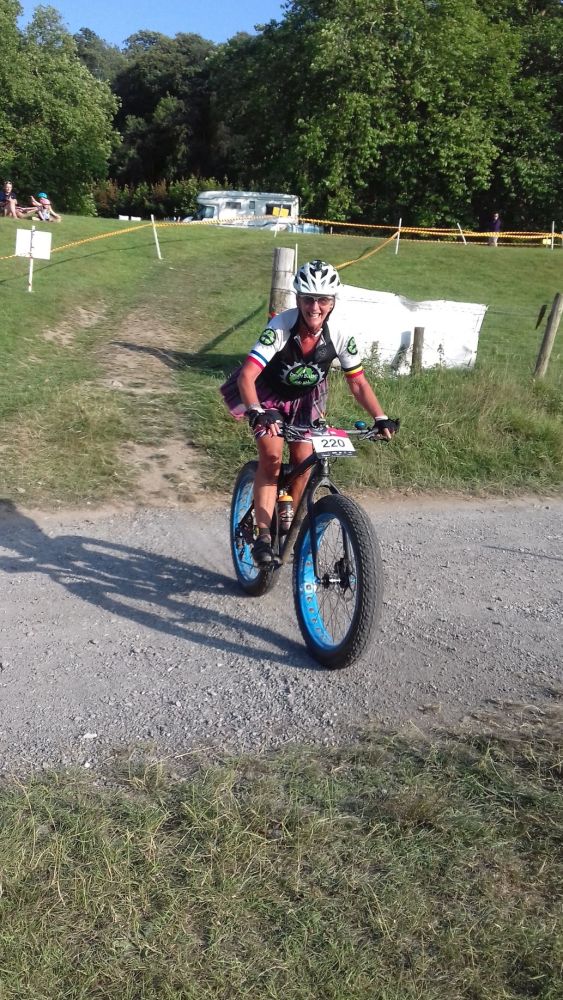 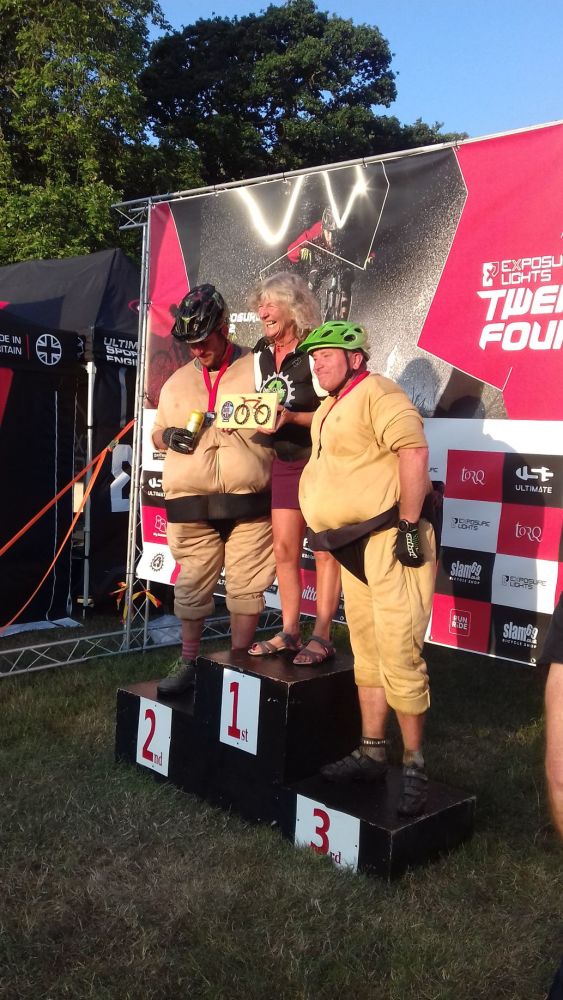 Our next event was one I've wanted to do for some years, the Chouffe Marathon way over the far side of Belgium in the Ardennes. Ben from Cranfold doubted he could get me ready for it but I decided I'd like to have a go. I had looked hard at the distances, climbing & times riders were achieving & we went for the shorter Raid at 65km not the 95km Marathon. We arrived at lunchtime on the Thursday in time to catch the Binck Bank Tour Pro race come through the village 3 times. Fri & Sat were exploring days trying to get our legs  used to the steep climbs, fantastic trails & sampling the great local beers.
Unfortunately the forecast rain started around 8pm Sat & continued for 12 solid hours meaning the Ardennes trails turned to mud. The start at 10am from the famous Achouffe Brewery was dry but it would rain on & off all day. We left the village up the road climbing steadily under Police escort  & we peeled off onto the dirt near Mont & although this spread the field out nicely there was still a queue of 10 mins for the first lethal & technical descent just outside Houffalise. The pattern of the day was simple, steep climbs (some you made some you didn't) & steep descents again some rideable in the conditions some not. We had a plan, if we arrived at the 45km split in 2 hours we would continue on the 65km if it was 3 hours it would be the 45km, anything inbetween we would discuss it, we got to that point after 3h 3min easy the 45km it would be.
When we rejoined the main route having already passed 2 guys looking for civilisation every rider looked broken so we had made the correct move. We finally arrived back in Achouffe after just 1 fall while walking ! nearly 5h 30m & 45km after we started, the slowest ride of our lives. Can't wait to try it again, & my knee survived. 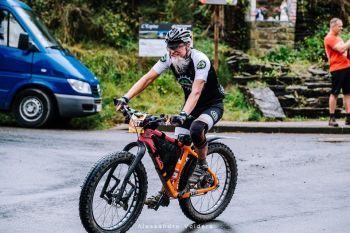 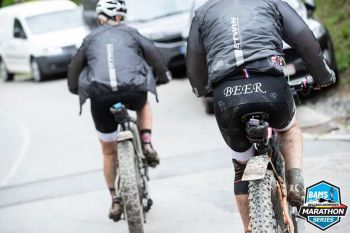 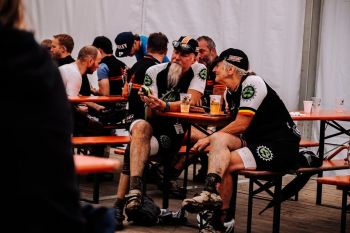 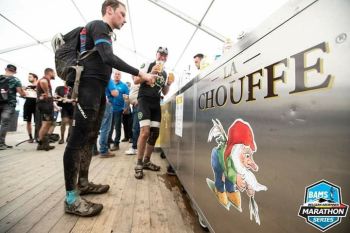 After the Chouffe Marathon it was back to Ben for more physio work & time to up the distance in our training as we headed towards our main goal of the year 24H BIM MTB in Italy.
So 5 weeks later we packed the 'Bears' into our new EVOC XL bike bags & boarded a plane (for the first time in over 7 years) & headed to Bologna & onward to Bellaria Ignea Marina just north of Rimini on the east coast of Italy. The race was flat & ran up & down both sides of a little river so no rest. We were hear for two reasons, our 30th wedding anniversary & to achieve the coveted 200 mile BPR patch, awarded for hitting the mark in a 24 hour race. (See Judy's previous blog for the full story).
Overall the event went very well, although I did have to stop & rest the knee meaning I only made it to 240km but Judy smashed it hitting 340km & 210 miles along with 3rd spot on the podium. The rest of the trip was about celebrating 30 years by eating & drinking the finest Italy could serve up in the sun. 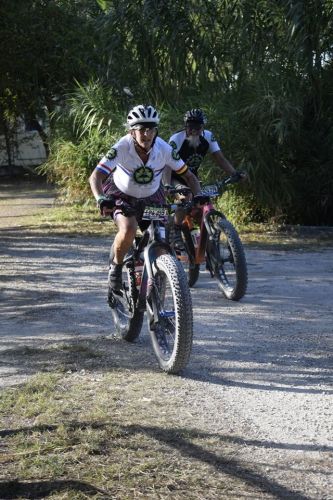 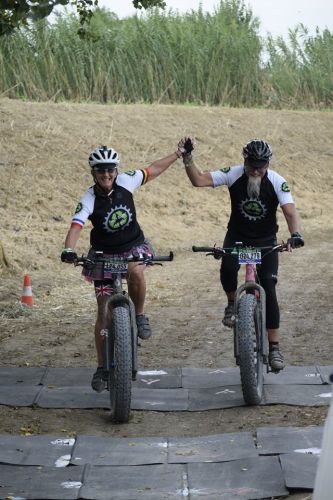 That should have been it for our season, but with it looking as though Brexit might happen we headed out to Belgium on Oct 31st hoping we wouldn't get back to be honest. On the 3rd Nov we headed to Middelkerke on the coast for the 20th Choffetocht 60km of sandy singletrack, dunes, beach & mud & yes it rained again. What an event though some amazing trails in the sand dunes which so suited the fat bikes. When you consider that when we first took the fatties to Belgium in 2013 nobody had seen one, there were over 30 entered, mind you there were over 1200 starters ! 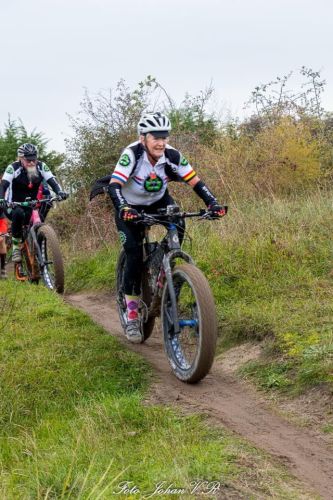 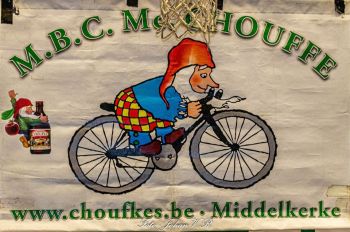 The traditional end to our year is always Fat Foray, part of the Global Fat Bike Day celebrations. This years event was our biggest yet with 32 fat bikes starting the 35km route & although we had a couple of problems with mechanicals, a lost rider & a broken hand I think most enjoyed the route, the beer at Craft Brews UK, & the sausage rolls from Beerbabe.co.uk. Here's to improving it & making Fat Foray VI even bigger & better. 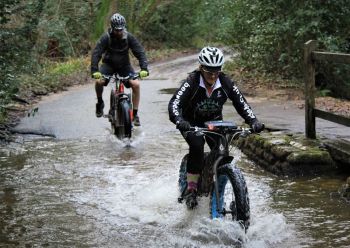 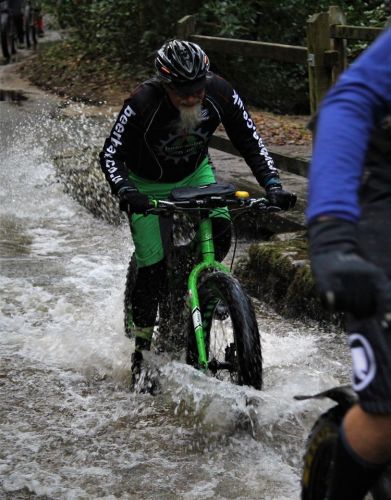 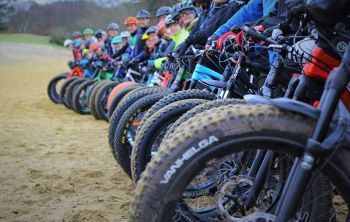