As the clock struck midnight and one year rolled into the next, lots of avid racers were clicking onto the Howies Battle on the Beach website to put in their first race entry of the year. It had to be done to ensure an entry in one of the UK’s newest & possibly best event of the year.

The inaugural Battle on the Beach, the brainchild of Matt Page, took place in March 2014 at Pembury Country Park and proved such a success that it’s second running was going to be bigger & more popular so getting in early was essential.

As with all races, the weather watch began 2 weeks before the event. Initially it looked as though it was not going to be that good (& I mentally prepared myself for the Puddle of Doom) but by the time we were crossing the river Severn into Wales, the sun was shining & due to be around all weekend. I don’t know whose palm Matt has crossed with silver, but it had certainly worked!

Camping in March is not something that I would choose to do, but we were down to t-shirts putting up the tent, maybe it wasn’t going to be too bad. But we were due for a very cold night.

With a practice lap done, we did some socialising; cake eating; beer drinking & race fuelling but the plummeting temperature sent us into tent quite early. The frost on the tent in the morning showed how cold it had been.

Fancy dress wasn't compulsory but does take some of the race pressure off. I have to admit that the thought of 600 racers freaked me out before the race! (The tutu photo was taken by Anthony Pease - click onto the picture to check out his other photos). 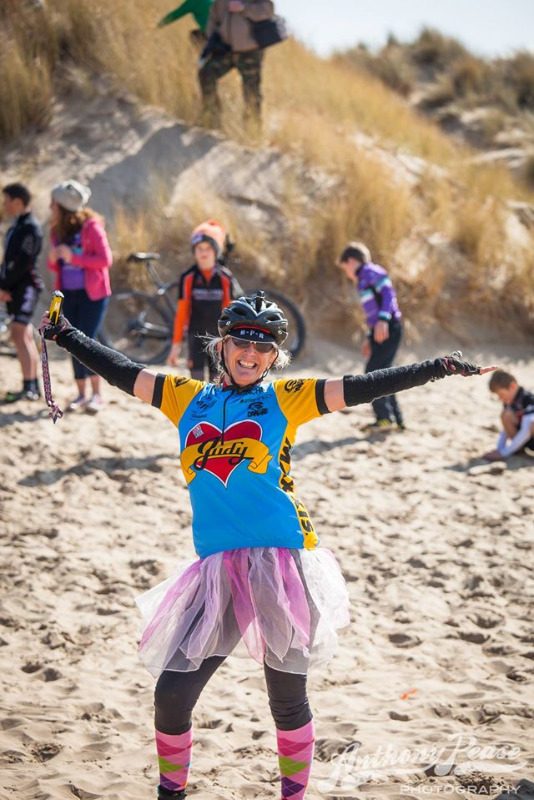 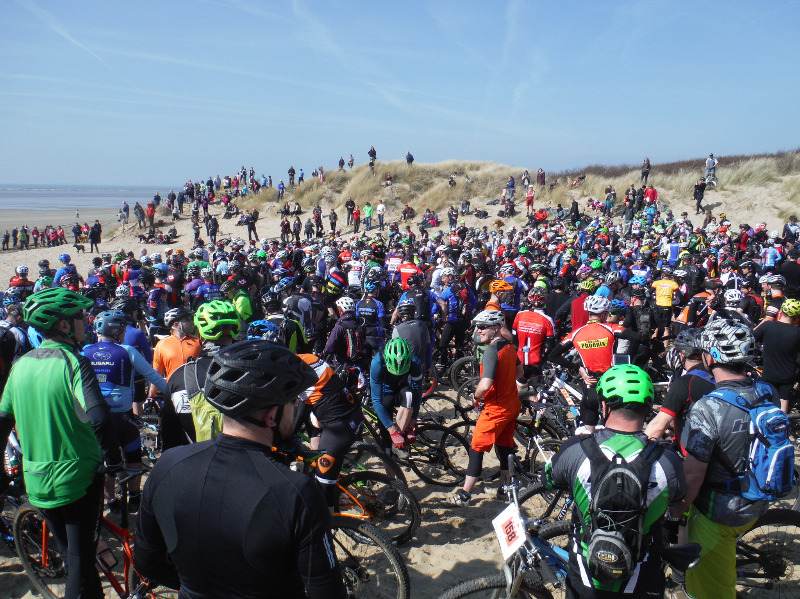 With nearly 600 racers, the start took place on the soft sand at the beach entrance. There were racers from all over the UK and some our European neighbours had also made the trip to show us how beach races should be done. It made for an awesome sight as we gathered at the start. The race was also the 2015 UK Fat Bike Championship and 74 of us were on big tyred beasts. Even the local police were taking notice: 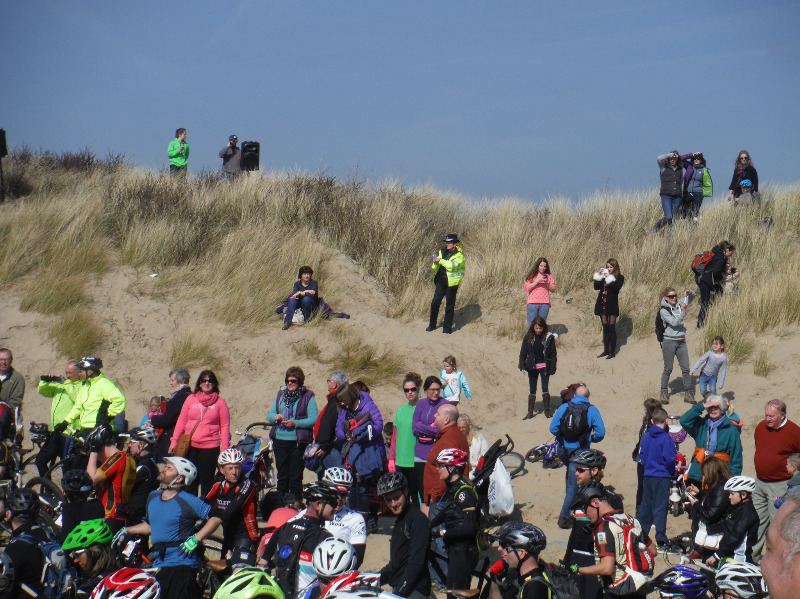 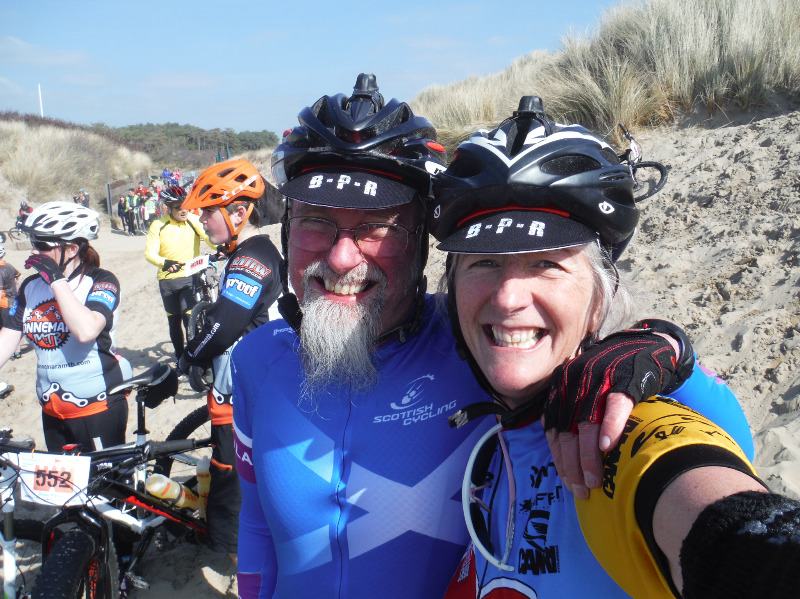 The start must have looked amazing to the spectators, but to those of us in the thick of it, it was rather frantic. All too soon though, there was a string of riders heading up the beach. I tried to draft other riders but ended up providing that service for someone else.

Lap 1 involved an extra 2k up the beach to an easier exit point to prevent the congestion that occurred on the same lap in 2014 and to also spread the field out, however we soon found ourselves in a queue at the first bit of single track. Although this spread the field out even more, it also meant that the leaders caught the back of the field even sooner.

I was having so much fun and was really pleased with my riding. My fat bike/tutu combination was bringing smiles to faces as I went passed. The leader caught me just after the start of my second lap. I saw a flash of a blue Kuga skin suit & he was gone. My second run up the beach was a lonelier affair so I got as aero as I could & pounded along as fast as I could go.  The climb off the beach was hard as the sand was quite soft & I’m sorry for anyone I held up as I hauled Bart upwards.

Throughout my second lap, I was caught & passed by lots more racers but I was having so much fun. The third lap was certainly my best & I rode all but the steepest of the climbs. I was really proud of myself. With a third of a lap to go, I started to catch a lady on a fat bike – red mist time!! I didn’t know how many women were contesting the ladies fat bike championship but I was going to do my best to catch her. I rode out of my skin & closed the gap, but I was running out of distance. In the end, she crossed the line 12 seconds ahead of me after 40km of racing! 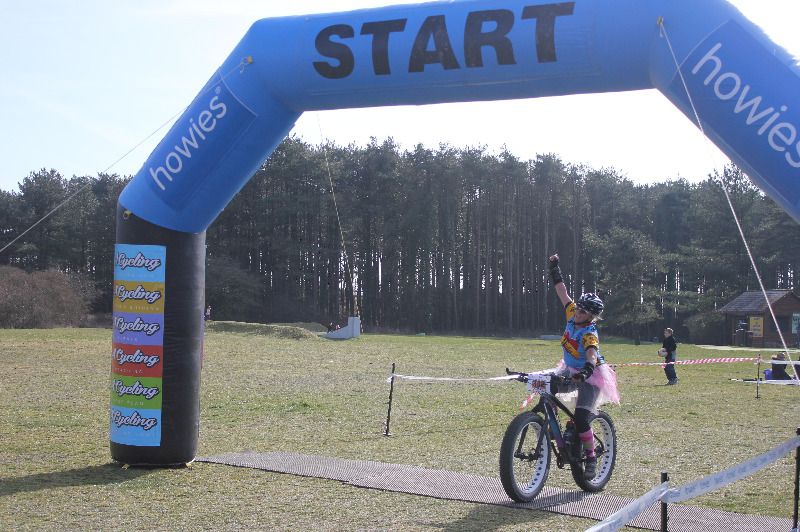 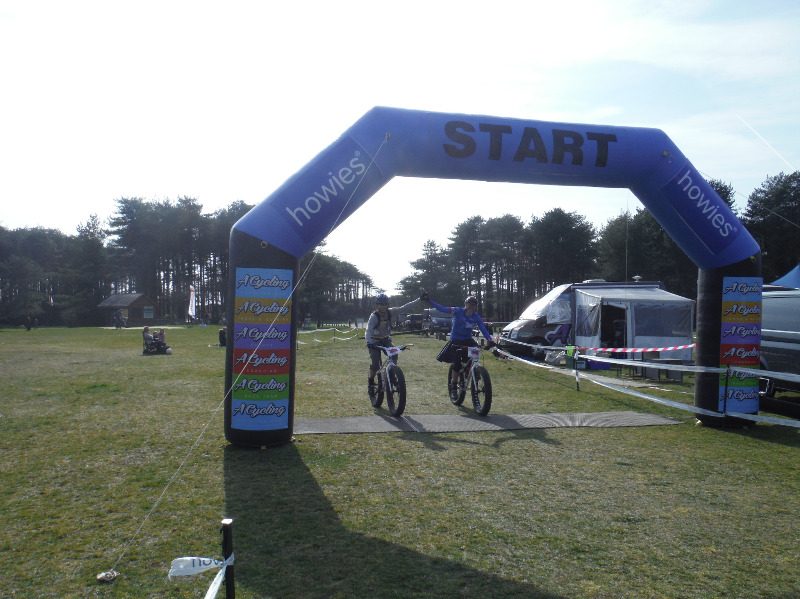 It turned out that she and I were also contesting the Grand Vet female category as well, so I was just pipped for the win in that. Hey Ho – I’ll have to try harder next year. I'm more than happy with 2 podium finishes! 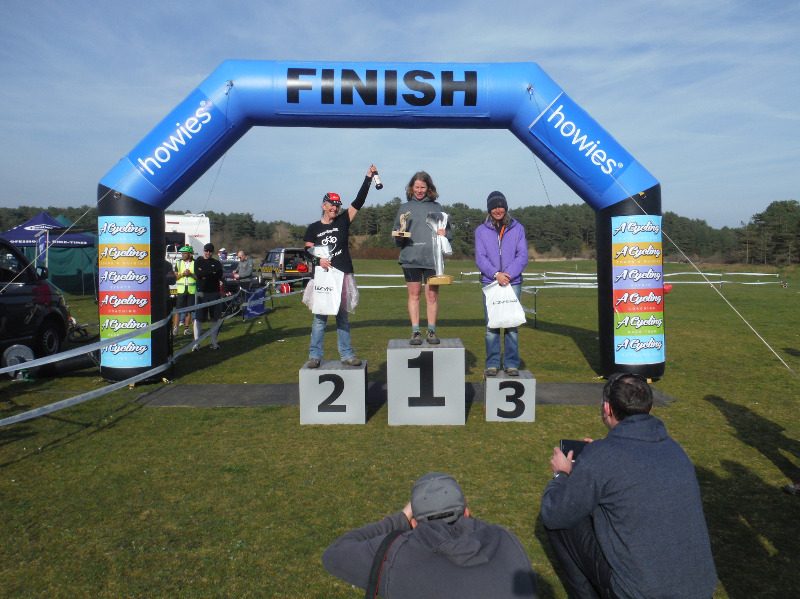 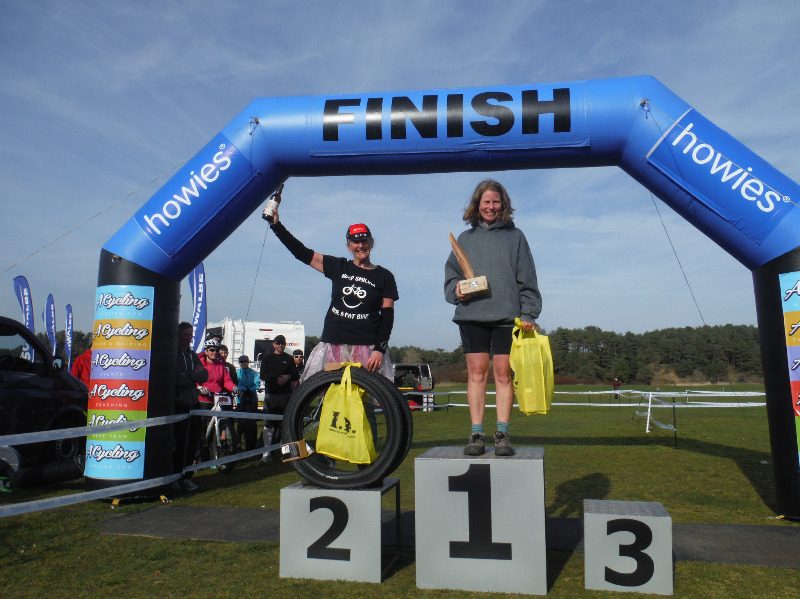 Once again, Matt & his team put on an amazing event and it was great to be able to meet people that we only know via social media. A huge shout goes out to the sponsors for the very generous podium prizes but I don’t think that I will ever grow into the Surly XL t-shirt or socks that were in the swag bag.

Thanks for all the photographers out there - especially Marie Lozman & Anthony Pease.

And one final comment, if anyone invites us to a New Years Eve party this year, we shall have to decline as Roy & I will be sitting at our computers (with auto fill set-up) to be ready to hit SEND as the clock strikes midnight!! 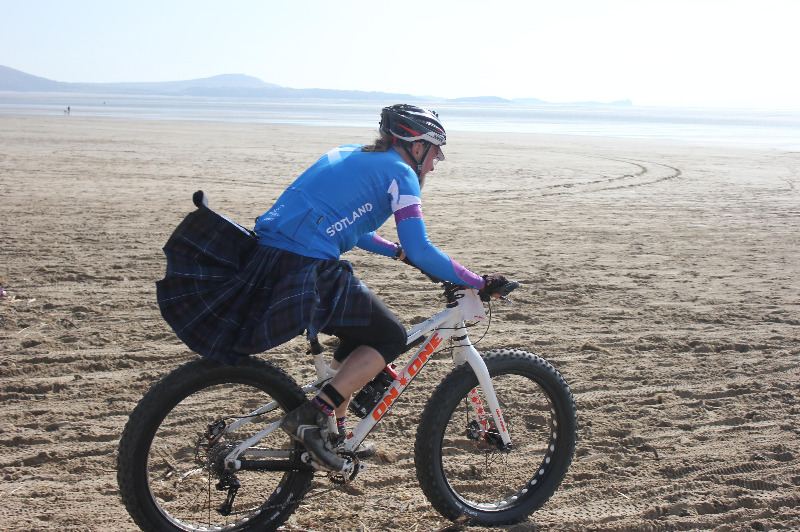 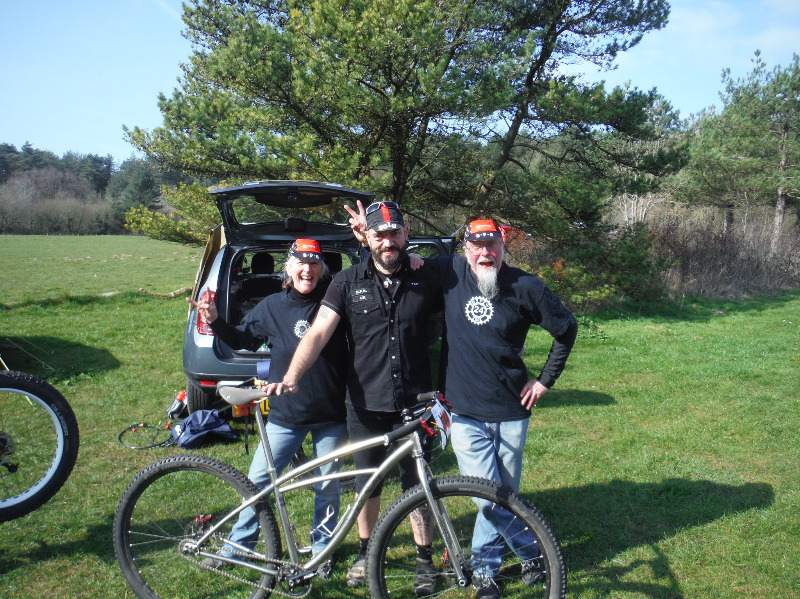 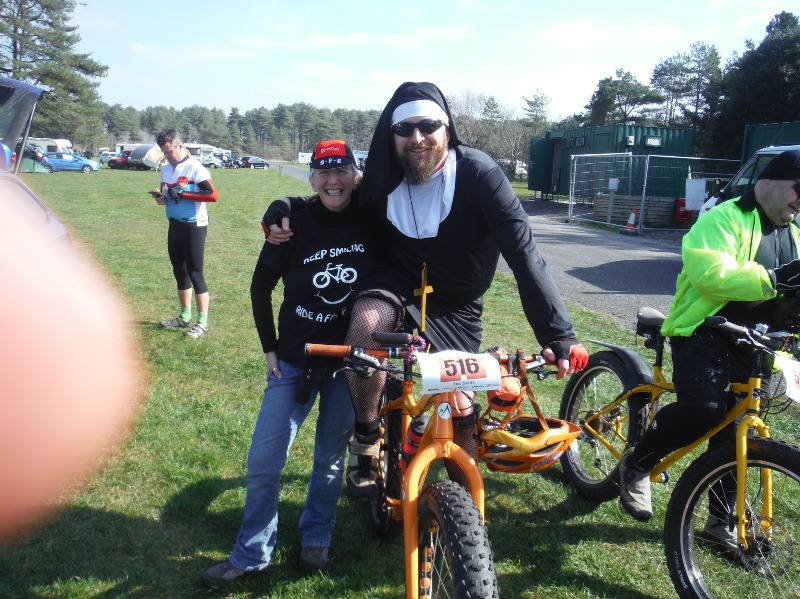 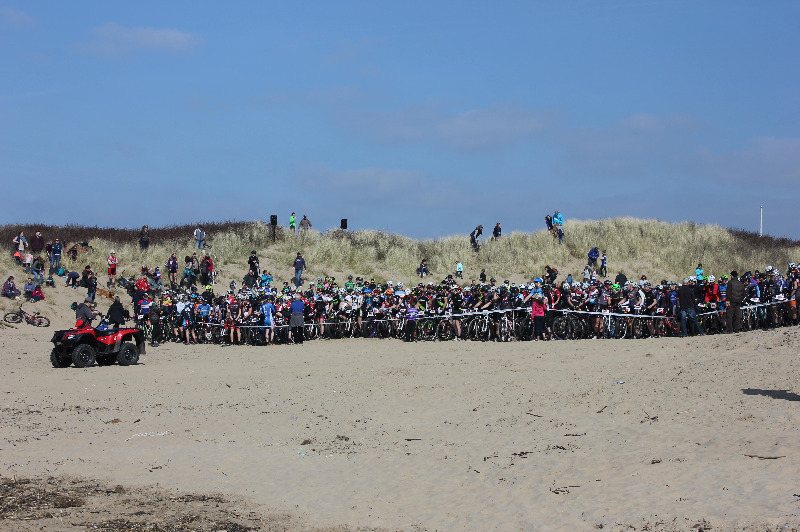 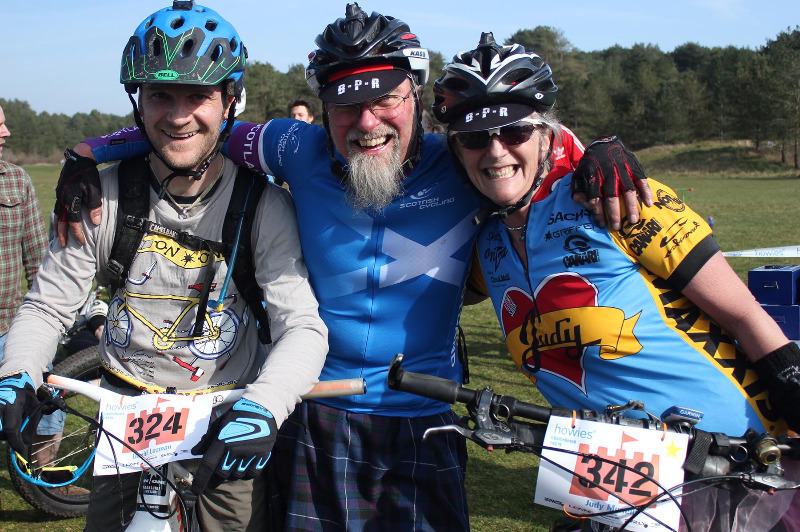