After 2 years of COVID Judy & I, aka ‘Team Beerbabe’, decided that 2022 would be a year of challenges.

Challenge No 2 was the Gent-Wevelgem Cyclo on March 26th which is held on the day before the Pros race. We picked this cyclo as it’s in an area of Belgium we know & love, plus the gite/holiday cottage we have rented many times is actually on the route of the pro race at the bottom of the Schomminkelstraat/Baneberg climb. 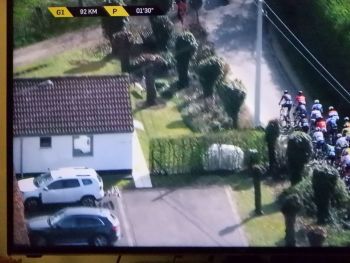 3 weeks before, we entered the 141km route & started to pray that there would be no rain. We already knew that there would be wind - there always is in Belgium. 10 days before we were due to travel, we began a ‘weather watch’ which started to improve & the long range was looking good. It was our 1st trip back for 2 ½ years so we were looking to make it a good one.

With the route of 141km including 2 of the famous off-road Ploegsteerts totalling 4.5km there was only one bike to take, our Lauf True Grits. We arrived on the Thursday before the event in glorious blue sky weather with temperatures to match, very un-March like for West Flanders. We had a nice little afternoon ride & a great Friday ride too.

We were up early on the day of the event for the 40 minute drive to Wevelgem & it was certainly chilly. We signed on, picked up our event plates & were ready for the off at just before 8am. 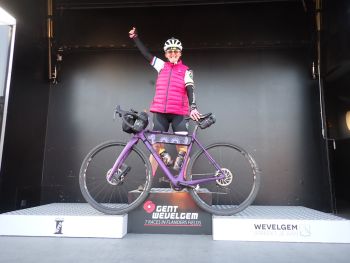 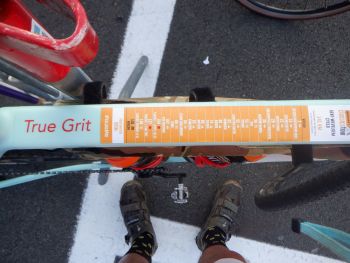 The route took us across & up towards Beselare before heading down the side of Polygon Woods to one of our favourite memorials, Black Watch Corner. As the day was starting to warm up, I removed a layer of clothing. Just beyond that we passed the spectacular new memorial ‘Brothers in Arms’, one to revisit I feel. From there, we headed into Ieper (Wipers to the lads) and through the famous Menen Gate to the 1st feed station in the market square in the shadow of the iconic Cloth Hall. 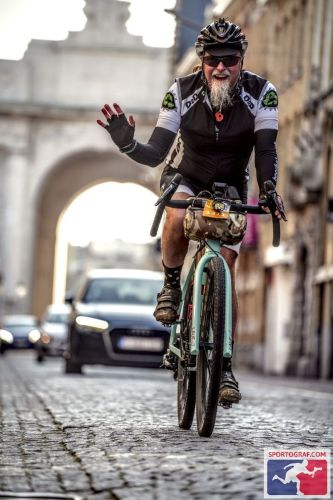 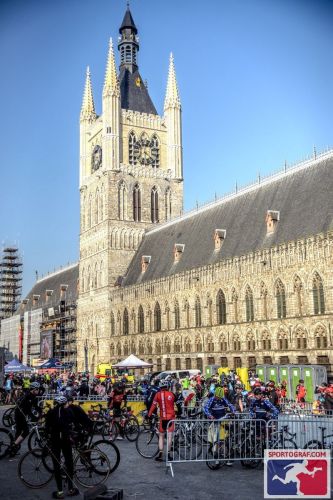 From Ieper, we headed towards the coast before turning left & passing the CWG Solferino Cemetery where Judy & I had stopped for our 2 minutes silence on 11/11/2018 during our ‘100 for the Lads’ ride. We skirted Poperinge (Pops) before the 2nd feed stop at Lijssenthoek Cemetery, resting place to nearly 11,000 soldiers from WW1. 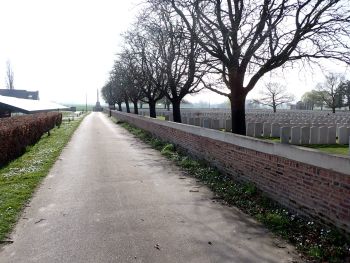 For us, we were now on home turf as it were, heading in a very convoluted route into Westouter passing one of our regular haunts, ‘t Peenhof which had just opened, but we resisted stopping for a beer. Skipping along the French border we had our 1st climb the Vidiagnberg before dropping back towards Westouter to the Woestenhof where we dumped some kit at the cottage we rent. We then immediately climbed the Schomminkelstraat, 900+ meters at 22% max followed by the Baneberg, 300m at 17%. If the legs weren’t warmed up before, they certainly were now! 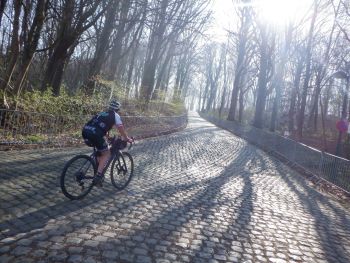 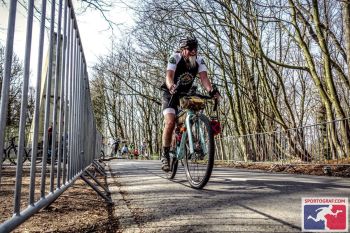 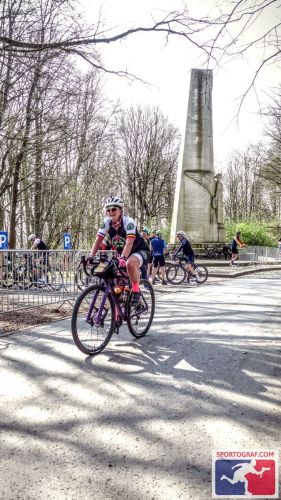 After descending the Rodeberg, we headed out into the countryside via Loker & Dranouter on the rolling terrain, eventually turning north again to tackle the Monteberg & the infamous Ossuaire side of the Kemmelberg at 27%, the toughest climb on the route. We then dropped into the 3rd feed stop, totally knackered, on the village green in Kemmel. 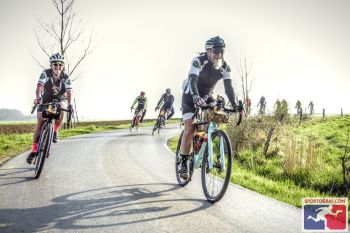 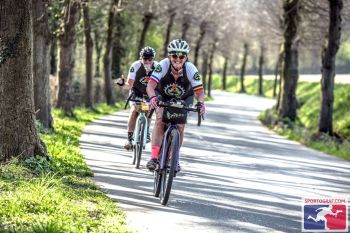 By now the wind had picked & we'd turned into it slowing progress & tiring the legs even more but our fuelling was working apart from the fact that the only savoury food the feed stations had was mini TUC biscuits! By the end of the event, I was sick to death of sweet stuff.

The route took us through Wijtschate (White Sheets) followed by a cruel climb into Messen passing numerous WW1 cemeteries on the way. We were rewarded with a fast, crosswind descent past the Irish Peace Memorial towards the Ploegsteerts (Plug Streets). Hill 63 was the longest ploegsteert we would do followed by the Christmas Truce. Both are hard packed, but loose off line & dusty. Immediately after these, we were into the final feed stop at the Plug Streets Experience. 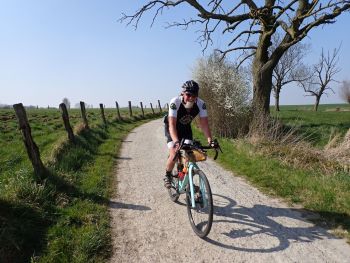 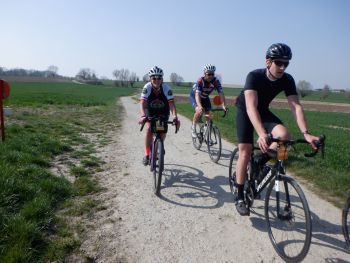 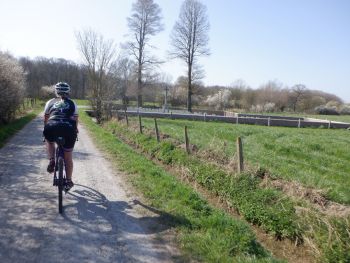 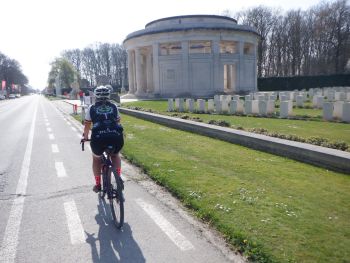 From there, we were just left with 35km of riding back to the finish in Wevelgem – all of which was into a headwind! Thankfully, somewhere after Menen, we were passed by a small group of 3 riders. As they were not riding much faster than us, this was the group to try & grab the wheel of for a tow. Once we had it, we wouldn't lose it again We were saved & the final 12km to Wevelgem would be an absolute pleasure. We weren’t the only ones to think like this and, as we passed the 5km to go marker on the River Leie, a collective cheer went up from our now merry band of 20+ riders. 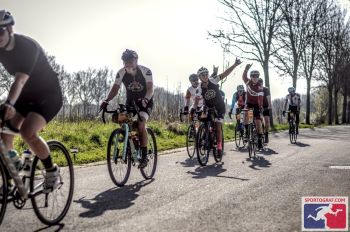 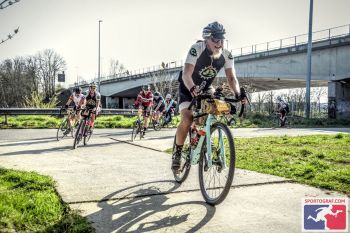 With 3km to go, we turned away from the river, climbed up to the main road & the long finish straight. We pushed along at a good lick passing broken riders desperate to see the finish line which soon appeared. As we crossed the line, I made sure I thanked the guy who had pulled us that last 12km. Now though the quest was to find beer & frites which we successfully managed. 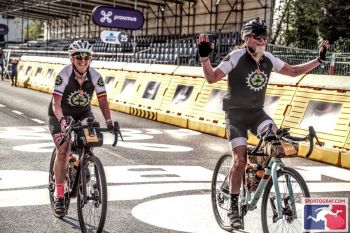 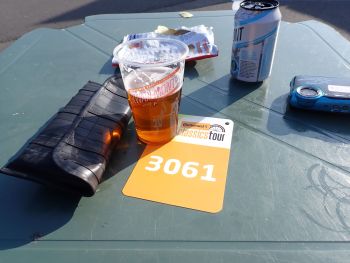 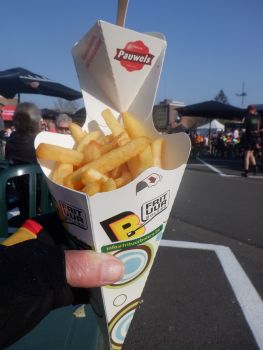 Our stats showed 142km & a moving time of 6h 54m. This was slightly off as we had stupidly switched the Leyznes on as we left the car park so included the 1km ride to the start, signing on & all the faffing around with the start photos. The real time was something under 6h 30m which we were both well happy with, having never attempted anything like it before.

Would we do it again? Straight after NO, but as time went on we both realised it was actually quite fun, however I very much doubt we'd ever be that lucky with the weather again & would it be fun on a cold, wet & windy day? I'm not so sure it would be. Somewhere between Type 1 & Type 2 fun I would say.

Obviously most people were riding road bikes but there were a fair few on gravel & 1 mad soul on a Fat bike! Our Lauf True Grit gravel bikes ran faultlessly throughout & were a joy to ride especially on Hill 63 & the Christmas Truce. To get over the big climbs we ran a 38 oval up front & the standard 11-42 on the back which allowed us to even conquer the Kemmelberg. 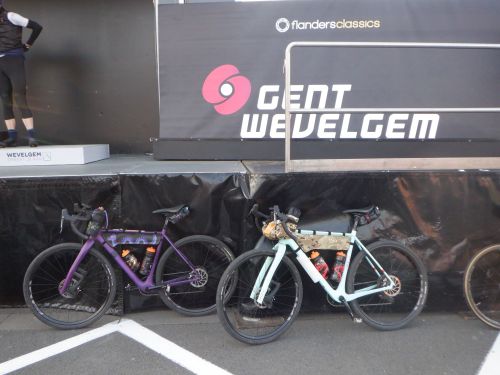 So what's the next challenge? Team Beerbabe are heading out for T24, the Belgium 24 hour mtb championships on the Lauf-equipped Beargrease fat bikes in 29+ trim.

Here are some of the atmospheric photos taken by the official photographers, Sportograf. Enjoy.